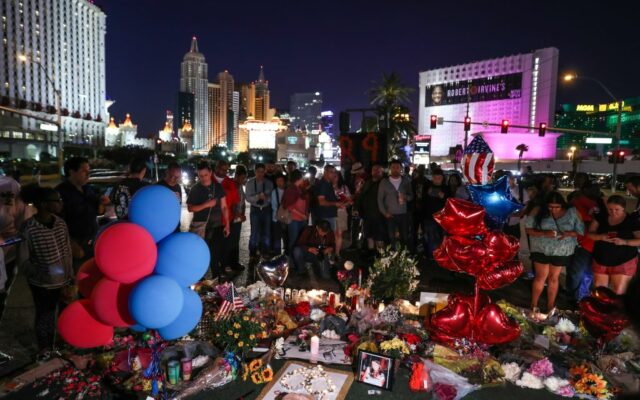 LAS VEGAS, USA - OCTOBER 5: People light candles, place figures and flowers at a makeshift memorial set up along the Las Vegas Strip for the Las Vegas mass shooting victims, who lost their lives after a gunman attack, on October 5, 2017 in Las Vegas, Nevada. Last Sunday, Stephen Paddock fired on thousands attending a concert in Las Vegas from his room at the Mandalay Bay Resort and Casino across the street, killing 59 people and injuring more than 500 before turning his gun on himself. (Photo by Bilgin S. Sasmaz/Anadolu Agency/Getty Images)

Jason Aldean has shared his perspective of being on stage at the Route 91 Harvest Festival when the Las Vegas shootings happened in a new documentary called 11 Minutes, set to premiere on Paramount+ on September 27th. E! reports that the four-part docuseries also features “first-person narratives from concertgoers, Las Vegas police officers, hospital trauma teams, first responders and FBI agents.” It also includes police bodycam footage and cell phone videos from that terrifying evening of Oct. 1, 2017.

Via a release, Jason said, “When I turned around, my bass player was just looking at me like a deer in the headlights, and my security guy was on stage at that point, telling me to get down, waving me off the stage.”

While Jason and his band and crew remained unharmed, 58 people lost their lives and more than 800 were injured.

A single shooter was responsible for the carnage. He was firing from a room at the Mandalay Bay hotel located across the street from the Festival.