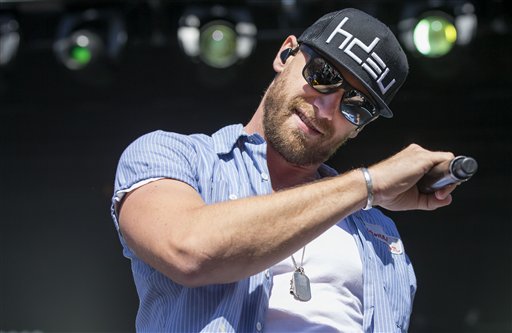 Chase Rice performs at the 4th Annual ACM Party for a Cause Festival at the Las Vegas Festival Grounds on Sunday, April 3, 2016, in Las Vegas, Nevada. (Photo by Eric Jamison/Invision/AP)
Chase Rice will open for Kane Brown, Saturday January 22nd, and 98.3 WCCQ has your tickets!
Play Name That Tune with Bossman at 7:30AM or Waste a Half Hour with Antone at 4:15PM to win your pair of tickets.  Ticketmaster.com has them, too.
Rice’s latest single, “If I Were Rock & Roll,” may be a familiar theme in his life.  In the song, he regrets how a relationship ended (“And if I weren’t a fool / I’d still be with you”).
But Chase admits that he’s not the greatest boyfriend.  He told Taste of Country Nights, “Yeah, I’m not the best.  I’m learning though.  I’m getting better in my years.  I’ll get there one day. I’m just not there yet.”

In fact, Chase revealed that, not only is he not the one to say “I love you” first; but if it even happens it’s typically years into the relationship.  Rice explained, “It takes me a good five to eight years to say that.  I’ve got so many screwed up things in my life, I don’t know what’s wrong with me.  And I don’t know what’s wrong with the girls that date me … why would you put yourself through that?”

Chase wrote “If I Were Rock & Roll” by himself, and it’s the debut release from his next studio album.