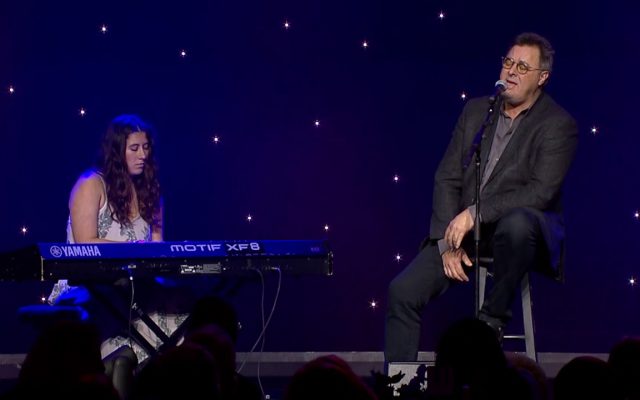 Maybe you just saw him, here, last weekend, performing with the Eagles at United Center.  Now, after a three-year hiatus, Vince Gill is ready to embark on another solo tour.

Vince will begin the 18-city tour in North Carolina on July 7 with stops still continuously added to the tour – which will last until the end of August.   The last time Gill brought his own tour here, was when he performed at the Chicago Theatre, right before Covid hit.

Wendy Moten has signed on to be Gill’s opening act.

Gill’s wife and fellow superstar, Amy Grant, got back on stage with him, this past Chris#tmas season, for two weeks of holiday shows, at the Ryman Auditorium in Nashville.  She had recovered from open heart surgery, over a year before, during pandemic lockdown.  They had also put on some online shows, some months after that.

Gill is pictured here, with their daughter, Corinna Grant Gill, who also took the stage for their holiday shows in their home state of Tennessee.