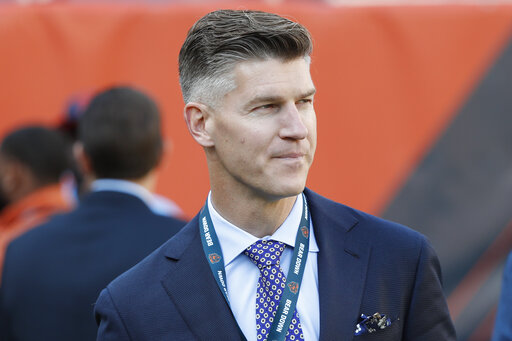 FILE - Chicago Bears general manager Ryan Pace walks the field before an NFL football game against the Green Bay Packers in Chicago, in this Thursday, Sept. 5, 2019, file photo. The Bears head into the offseason with some big issues to address after going 8-8 for the second year in a row, starting with whether general manager Ryan Pace or coach Matt Nagy will be retained. (AP Photo/Charles Rex Arbogast, File)

The Bears aren’t giving up on general manager Ryan Pace and head coach Matt Nagy just yet. Reports say the team is bringing both back for the 2021 season. Chicago will need to find a replacement for defensive coordinator Chuck Pagano, who is retiring. Pace and Nagy are being retained after consecutive 8-and-8 records after a 12-and-4 season in 2018. Their futures were in question after the Bears had a six-game losing streak this season. Chicago ended up winning three straight in December to secure a postseason berth for the second time in Nagy’s three seasons.

As much as I hate to say it, this move is typical Bears. Fans are crying for GM Ryan Pace to be fired along with coach Matt Nagy. Instead the best coach we have Defensive Coordinator Chuck Pagano is the one leaving. What makes this even more distressing is the fact a legit QB could possibly be available to the Bears with the 20th pick in the upcoming NFL Draft. Can we trust a team that traded up to grab Mitch Trubiskey giving up draft picks when clearly he was going to be available for their pick. GM’s are usually graded on 1 or 2 great or stupid moves. Aside from that, the 2015 First round selection of WR Kevin White was maybe even worst than the Trubiskey pick. Add to that picks like TE Adam Shaheen (2nd round, 2017), Edge Rusher Leonard Floyd (1st round, 2016), Center Hroniss Grasu (3rd round, 2015). I could keep going on and on.

The problem with keeping GM Ryan Pace is that a legit Quarterback could be available with the 20th pick in the upcoming draft. Many draft boards had Alabama QB Mack Jones available, but after a magical performance with Monday’s National Championship game, his value has shot up. Florida’s Kyle Trask might be there, Does is it really matter? Do you trust Ryan Pace and for that matter Matt Nagy to draft and develop a QB? History says the Bears are screwed. So fans, you’ll have to settle for another 8-8, 7-9, 6-10 season next year or a team that might win 9 games, but get ousted in the first round of the playoffs. The disfunction of the Bears starts from the top with Bears President Ted Phillips. Phillips is an accountant and is not a “football” mind. The Bears need a new President that knows the NFL. Then the rest might fall into place. The lack of change sets the Bears back another 2 years at least with the likely outcome that Nagy & Pace will be gone next year or the year after. Watching all this unfold reminds me how hard it is to be a Bears fan!