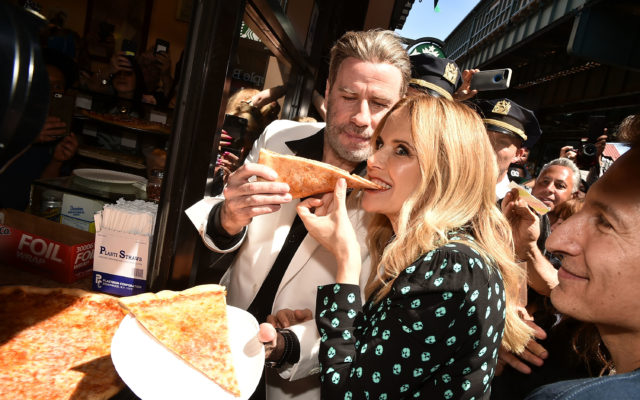 BROOKLYN, NY - JUNE 12: John Travolta and Kelly Preston attend the ceremony to honor John Travolta for his body of work in TV and Film, in anticipation of the release of “Gotti” movie on June 15th, 2018 at Lenny's Pizza on June 12, 2018 in Brooklyn, New York. (Photo by Theo Wargo/Getty Images for “Gotti” Movie)

The death of Kelly Preston on Sunday (July 12th) was mourned by Hollywood as well as some in the country music world. Shania Twain, Kenny Chesney and Toby Keith were among those who turned to social media to pay tribute to the late actress.
Shania shared a picture of herself with Kelly, Kelly’s husband and Shania’s Trading Paint movie co-star, John Travolta, their daughter, Ella Travolta, and Shania’s husband writing, “I’m unbelievably saddened by the news that Kelly Preston has passed and at such a young age. A beautiful and kind person I was fortunate enough to have known. My heart breaks for John and the kids.”

Kenny Chesney shared a picture of himself with Kelly writing, “Goodbye to my beautiful friend Kelly Preston.”

Toby Keith starred opposite Kelly in the 2006 movie Broken Bridges, which also featured Willie Nelson. Toby posted a throwback picture of the three writing, “RIP Kelly Preston. I was blessed to do a film with you. You were our daily sunshine. What a sweet soul. Rest well girl. My prayers today will be for your family.”
Kelly died at the age of 57 after a two-year battle with breast cancer.

RIP Kelly Preston. I was blessed to do a film with you. You were our daily sunshine. What a sweet soul. Rest well girl. My prayers today will be for your family. -T

“STAY IN THE FIGHT”: Brett Eldredge opens up about battle with anxiety