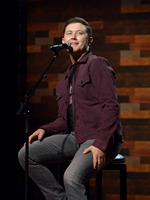 Scotty McCreery has been added to the list of celebs who are taking part in the BMW Charity Pro-Am Golf Tournament – which runs from June 10-13th, in Greenville, SC.