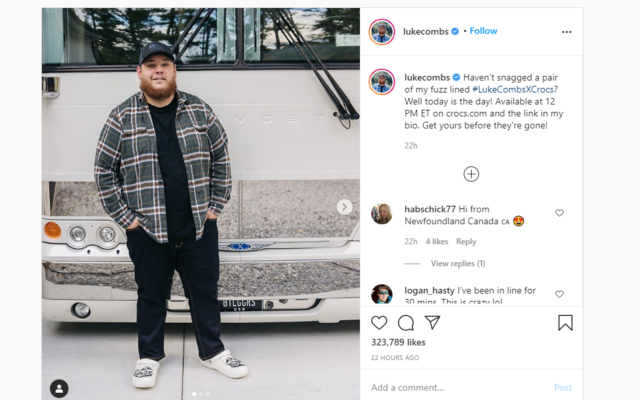 True:  Crocs aren’t the most attractive footwear out there; but, arguably, they are the most comfortable – especially during a pandemic.  It’s the comfort of the Crocs, which is believed to have made sales soar.

Crocs sales growth skyrocketed in 2020 with its fourth-quarter revenue at 55-percent, up from their projections of 20- to 30-percent.

The uptick is said to be because younger, mainly female, customers gravitated toward Crocs.  And because they are comfortable, plastic, and easy to sanitize, perfect for the current situation.  They can be slipped on, quickly, to run outside.  And they aren’t seen under a desk.

Are you still undecided about buying a pair of Luke Combs Signature Crocs?  You shouldn’t be.  Dierks Bentley wears his while he’s flying his plane, feeding his pets, driving his car, doing a coffee run, and hanging out in the snow.