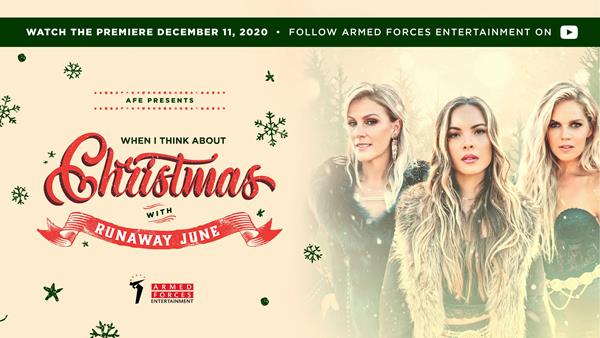 Runaway June is honoring military members and their families with a special holiday performance. The trio’s “When I Think About Christmas” concert is available virtually through Saturday, January 2nd, on the Armed Forces’ Entertainment YouTube channel. It’s the first time in several decades the troops will not be entertained in person. Source: Armed Forces Entertainment

Filmed in Nashville, Tennessee, Runaway June is bringing a new music special to the U.S. military and Armed Forces Entertainment, just in time for the holidays. When I Think About Christmas is an original virtual concert coming Friday, December 11th, exclusively on YouTube.

The band delivers heart-warming renditions of “Let It Snow,” “Jingle Bells,” and “Sleigh Ride.” Delivering a one-of-a-kind experience for deployed active-duty military and their families, Runaway June delights with Christmas spirit in an AFE first! Naomi Cooke, Jennifer Wayne, and Natalie Stovall make up the Nashville trio behind the acclaimed 2019 album, “Blue Roses.” CMT‘s “Next Women of Country” will next appear on Luke Bryan’s “Proud To Be Right Here” tour in 2021.

Runaway June’s latest EP, also titled When I Think About Christmas is available on all streaming platforms. In the special concert, you’ll see them sing original singles from the release. Listen to “Christmas on the Radio” and other Runaway June favorites like “Lipstick” and “We Were Rich.”

About Armed Forces Entertainment: AFE is the official Department of Defense agency that provides quality entertainment to U.S. military personnel serving overseas, primarily at contingency operations and in remote and isolated locations. Founded in 1951, we bring a touch of home through music, sports and comedy entertainment to more than 400,000 roops annually, providing our dedicated military much-needed downtime. All while creating experiences as rewarding for the entertainers as it is for the service members.

The State of Sound: WCCQ Brings You a Live Broadcast from The Abraham Lincoln Presidential Library & Museum