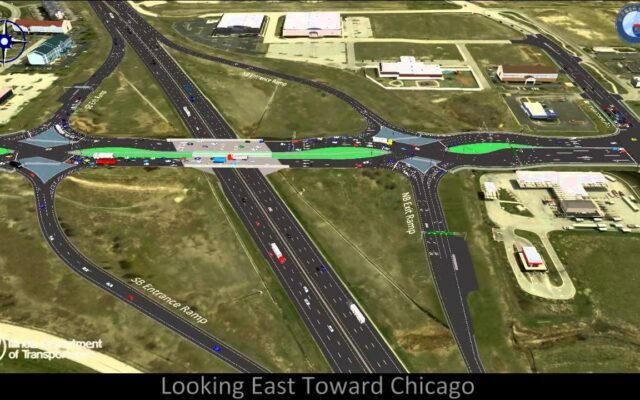 The end may be in sight for the infamous Weber Road and I-55 reconstruction, but before it is complete, there is one major obstacle that has to be tackled first. We have learned that IDOT will release plans for electrical work to be completed at the major intersection in June. In order for this work to be completed, there will be no left turns allowed from either I-55 or Weber Road for at least two weeks. A detour route will be posted to direct traffic around the area.

Just before The Afternoon Rush, IDOT released this statement:

The Illinois Department of Transportation announced today that work will resume on the Interstate 55/Weber Road interchange, in Bolingbrook and Romeoville, weather permitting, Friday, April 8. To complete the work, daytime and occasional overnight lane closures will take place.

The $47.9 million project involves reconfiguring and widening the existing interchange into a diverging diamond design and adding a third lane of travel to each direction of Weber Road, between Normantown Road and 119th Street/Rodeo Road. The project also includes installing modernized traffic signals at the intersections of Normantown Road, Remington Boulevard/Windham Parkway, Rodeo Drive/Remington Boulevard and at the interchange ramps, as well as new LED lighting, improved drainage, a raised median and landscaping.

In June, to accommodate the installation of traffic signals and crossovers to put Weber Road traffic into the full diverging diamond configuration, left turns at the interchange will not be allowed for approximately two weeks. A detour will be posted.

The project is anticipated to be completed later this summer.

Motorists can expect delays and should allow extra time for trips through this area. Drivers are urged to pay close attention to flaggers and signs in the work zones, obey the posted speed limits and be on the alert for workers and equipment.