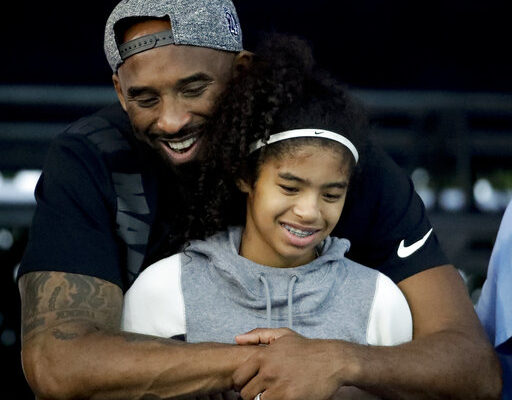 FILE - In this July 26, 2018 file photo former Los Angeles Laker Kobe Bryant and his daughter Gianna watch during the U.S. national championships swimming meet in Irvine, Calif. Bryant, the 18-time NBA All-Star who won five championships and became one of the greatest basketball players of his generation during a 20-year career with the Los Angeles Lakers, died in a helicopter crash Sunday, Jan. 26, 2020. Gianna also died in the crash. She was 13. (AP Photo/Chris Carlson)

Yesterday (February 24th), family, friends and thousands of fans gathered at the Staples Center for the memorial service of NBA icon Kobe Bryant and his 13-year-old daughter Gianna Bryant — who both died in a helicopter crash with seven others last month. Beyonce kicked off the memorial with a performance of two of Kobe’s favorite songs “XO” and “Halo.”
The memorial, which was hosted by Jimmy Kimmel, also featured tributes from Alicia Keys and Christina Aguilera.
Friends like Shaquille O’ Neal and Michael Jordan paid tribute to the fallen icon and Kobe’s wife Vanessa Bryant bought everyone to tears with her touching words about her “soulmate” and loving daughter.

“As I got to know him, I wanted to be the best big brother that I could be.”

"God knew they couldn't be on this earth without each other." #KobeFarewell 💜💛 https://t.co/ZqHCz2SNrs

Kobe and Gianna were laid to rest in a private burial service earlier this month at the Pacific View Memorial Park in Corona Del Mar.