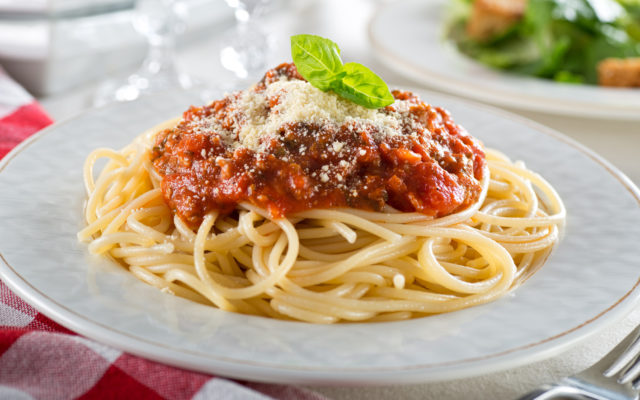 A plate of delicious spaghetti bolognese with meat sauce and fresh basil.

The real holidays might be over, but the silly made-up ones never end.  Today is National Spaghetti Day and National Trivia Day.  So here’s some spaghetti trivia to celebrate both . . .

1.  Do you know what a single strand of spaghetti is called?  It’s a “spaghetto.”  It comes from the word “spago,” which means “string” or “twine” in Italian.

2.  McDonald’s used to sell spaghetti 40 years ago.  What was it called?  “McSpaghetti.”  It’s still on the menu in the Philippines, and at one location in Orlando apparently.

3.  How many Americans do not like spaghetti and meatballs?  Only 6% according to a recent poll.  And just 3% say they never eat spaghetti.

4.  Yes or no:  Is spaghetti the most popular Italian food in the U.S.?  According to recent polling . . . no, it’s 3rd.  Garlic bread is 1st.  Lasagna is 2nd.  Then spaghetti, macaroni-and-cheese, and ravioli.

6.  How many of us use a spoon to twirl our spaghetti?  Meaning you spin it around your fork using a spoon instead of your plate?  Around 20%, or one in five Americans do it.  For what it’s worth, Italians do not do it that way.  They think it’s crazy!