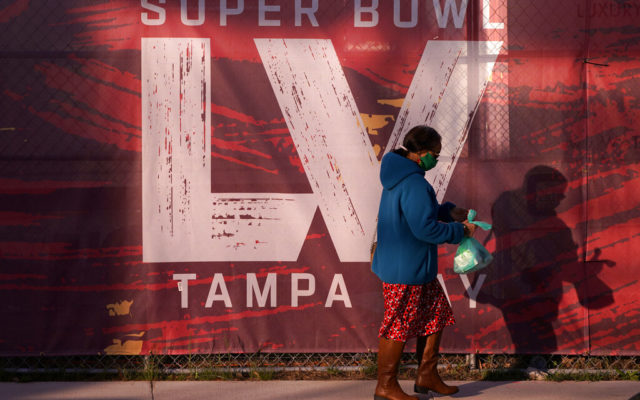 A woman walks past signage for Super Bowl 55 as she enters the NFL Experience on Wednesday, Feb. 3, 2021, in Tampa, Fla. The city is hosting Sunday's Super Bowl football game between the Tampa Bay Buccaneers and the Kansas City Chiefs. (AP Photo/Charlie Riedel)

Here are some interesting statistics about the Super Bowl:
– The Buccaneers are the first team to play in a Super Bowl in their home stadium.
– Sarah Thomas will become the first woman to officiate in a Super Bowl.
– Tom Brady is the second quarterback to lead teams from the AFC and NFC to the Super Bowl (Patriots and Buccaneers). The other was Craig Morton, who led the Cowboys (NFC) to Super Bowl V and the Broncos (AFC) to Super Bowl XII, but lost both times.
– Four franchises have failed to make it to the Super Bowl: Browns, Jaguars, Lions and Texans. All but the Texans have made it as far as the conference championship game at least once.
– Mahomes was six years old when Brady won his first Super Bowl title in 2002 with the Patriots.
– Since 2005, the team wearing white jerseys in the Super Bowl is 13-3. The Buccaneers, who were already this year’s designated home team even before learning they would play in their home stadium, have chosen to wear their white jerseys with pewter pants.
– Domino’s says it typically sells around 2 million pizzas on Super Bowl Sunday. That’s an increase of about 30% from a normal Sunday.

The Super Bowl will have a bit of a country feel to it.

Luke Bryan and Eric Church will perform as part of The Big Concert for Small Business, Verizon’s after-party for the Super Bowl on Sunday (February 7th) at 11 p.m. ET. Hosted by Tiffany Haddish, the event will also feature performances by Alicia Keys, Brandi Carlile, Brittany Howard, Christina Aguilera, H.E.R., Jazmine Sullivan, and Miley Cyrus. The concert will be livestreamed on Yahoo, Fios, @Verizon on Twitter, Twitch, YouTube and TikTok, and broadcasted on BET, CBS Sports Network, CMT, MTV2 and MTV Live, as well as aired on iHeart and Sirius.
Luke said, “Small businesses are such an important part of our communities. I was honored to participate in their Pay It Forward Live series back in March of 2020. We need to make sure we are continuing to support them, and I love that Verizon has stayed committed to raise awareness on their behalf.”
Viewers can tag their favorite small businesses using #BigConcertSmallBiz or text SMALLBIZ to 20222 to make a one-time donation of $10 to Local Initiatives Support Corporation (LISC).

Eric Church and Jazmine Sullivan will team up for the first time to sing the National Anthem during the Super Bowl LV pregame festivities at Raymond James Stadium in Tampa Bay on Sunday, February 7th. Pregame events will be broadcast live on CBS beginning at 11:30 a.m. ET.

TikTok is hosting a tailgate pregame show ahead of the Super Bowl this Sunday. It’s a two-hour show that’ll feature a live concert by Miley Cyrus, appearances by Rebel Wilson, Kane Brown, Adam Devine and others. TikTok creators Tatayanna Mitchell and Jack Mancuso, along with chef Matt Broussard will be sharing their favorite game day recipes. The first-of-its kind event will be hosted by Steve Harvey and MJ Acosta. You can catch it live, starting at 2:30 pm Eastern time ahead of kickoff

The artist H.E.R. has also been added to the lineup to sing America the Beautiful.