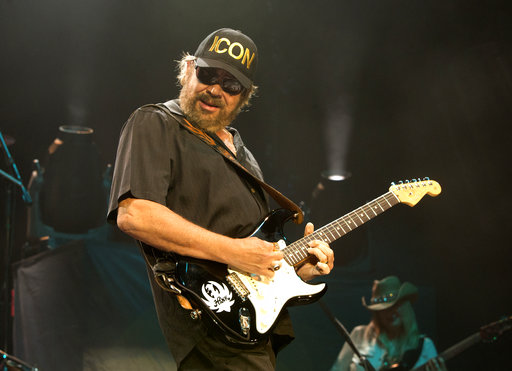 Hank Williams, Jr. performs in concert at The BB&T Pavilion on Saturday, Aug. 19, 2017, in Camden, N.J. (Photo by Owen Sweeney/Invision/AP)
Hank Williams Jr. was finally inducted into the Country Music Hall of Fame on Nov. 21, and had plenty to say about how long it took him to receive the honor. Williams, 72, made his first recording in 1964 and established himself as a force of country music outside of his father’s shadow during the 1970s and 1980s. Despite his success, Williams’ induction was not announced until last year. He even sang about not being a member in his 2015 song “Just Call Me Hank.”

In his short speech, Williams joked that if the induction was scheduled the day before, he wouldn’t have been there. “Well, the good thing is this didn’t happen yesterday, which was the opening day of deer season, which is kind of like squirrel season was with my father,” he said, reports Saving Country Music. “My little 6-year-old grandson sitting out there with his .44 Magnum Ruger, took his first deer.”

Then, it sounds like Williams was going to begin a longer speech when he referenced his long wait to join the Country Music Hall of Fame. “A lot of people to thank. And I know who they are. They know who they are. That part about the family with the open arms? Well, that might have been a little bit different in my case,” he said. He then ended his speech by referencing some of his most popular songs. “But, I went to Muscle Shoals, Alabama. And all my rowdy friends are coming over tonight. I was born to boogie. And this is a family tradition,” he said.

Williams’ speech lasted just under two minutes, which was incredibly short compared to the other 2020 inductees. Marty Stuart spoke for 13 minutes and songwriter Dean Dillon spoke for eight minutes. The Country Music Hall of Fame announced the 2021 inductees in August. The group includes The Judds, Tay Charles, Eddie Baters and Pete Drake.

Williams is the son of Hank Williams, the country music pioneer who was a member of the first Country Music Hall of Fame class in 1961. Williams has recorded over 50 albums in his career, starting with his first, a collection of songs written by his father, in 1964. By the mid-1970s, Williams changed his public persona by moving away from looking like his father and changing his style. He released his breakthrough album Hank Williams Jr. & Friends in 1975 and scored hits through the 1990s. His 1982 song “A Country Boy Can Survive” is one of his signature songs and was re-recorded as “America Will Survive” after the 9/11 terrorist attacks. Williams’ 1984 song “All My Rowdy Friends Are Coming Over Tonight” was the opening theme song for Monday Night Football from 1989 to 2011. ESPN brought the song back in 2017, with Florida Georgia Line and Jason Derulo joining Williams. The network dropped the song again before the 2020 season.