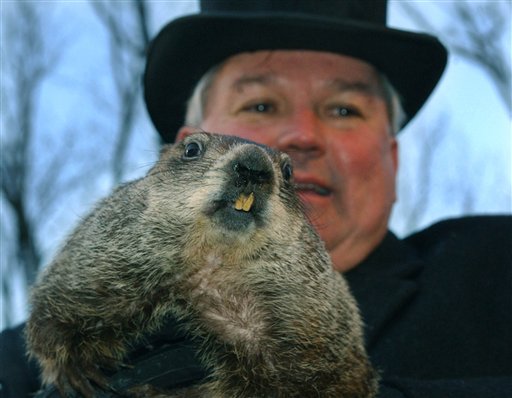 When Punxsutawney Phil emerged in front of cameras on Groundhog Day, Sunday, he didn’t see his shadow – predicting an early Spring.
Don’t break out those shorts just yet; meteorologists told USA Today that Phil’s prediction for an early Spring doesn’t seem to be correct. Cold fronts have been forecasted for the remaining winter season.  Here’s the complete story with video of Phil from MSN.

From historic Woodstock Square, Rick Bellairs, chairman of the Woodstock Groundhog Days Committee, said the crowd was by far the biggest the annual event has drawn.  This is the famous location of the Bill Murray movie, Ground Hog Day.

[PS  Did you see the Jeep commercial, during the Super Bowl, with Murray?  He was enjoying actual Ground Hog Day, all over again, in his new Jeep.  The Northwest Herald reports that the commercial was filmed in northwest suburban Woodstock, at the famous town square where the movie was filmed in 1993.]