FRISKY FRIDAY FRONTLINE: ‘Hey, My Eyes Are Up Here” – Heard That? You Have Problems 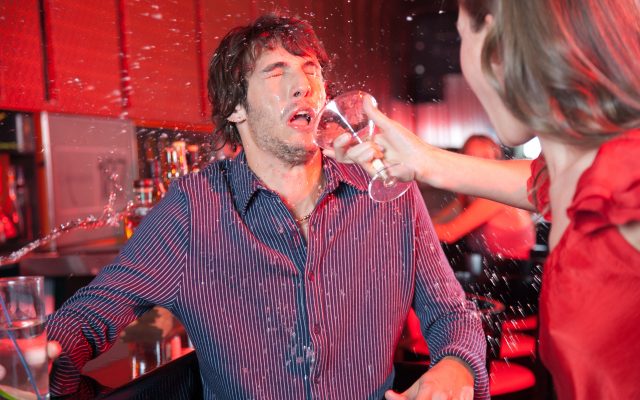 Woman in nightclub throwing beverage in man's face
Study:  Those Who Ogle Also More Likely to Have Harmful Attitudes
“Hey, my eyes are up here.”  Has anyone ever said that to you?

If you spend more time staring at the bodies of others, than you do looking at their faces, it’s not a good sign.

It certainly seems to indicate that you’re “all about you” (narcissistic), or, at the very least, lacking a great deal of empathy.

Researchers from Edith Cowan University looked at “eye gaze behavior” and found that looking at people’s bodies, rather than their faces, is linked with harmful attitudes towards sexual assault.

Study leader Dr. Ross Hollett says, “Gazing at someone’s body instead of their face is one form of sexual objectification, or valuing people for their bodies over their minds or personality.  This sexually objectifying gaze behavior can lead to more harmful attitudes and behaviors.”

They specifically found that men who tended to gaze at women’s bodies were more likely to assume that women invite or tolerate rough sexual conduct.

Hollett adds, “Understanding how women and men look at each other is important for explaining and predicting social behavior, particularly those behaviors that have harmful consequences.”