FRISKY FRIDAY FIBS: How Many Ways Can a Spouse Turn Down a Make-Out? 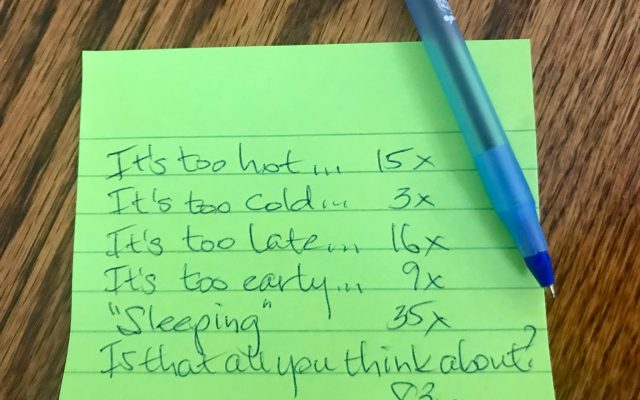 This is from last year, but getting really popular, again.  There was a live show, in London, which featured famous people, reading real love letters – but not their own.  Many were written by historical figures, or other famous folks, or more random –  like this note from a random guy to his wife.

It isn’t exactly a love letter, though.  He kept track of all the reasons she turned him down for intimacy.  He asked 365 times that year, but only scored 36 times…  less than one out of ten.  I guess you might say that, when he couldn’t enjoy her figure, he wrote down the facts.

It was read by Matt Berry – you might know him as Laszlo, in the FX show “What We Do In the Shadows.”

Here are some reasons the guy did not succeed:

“It will make the cat jealous” 18 times.