FRISKY FRIDAY FEATURE: A Guy Has Created a Dating Website – Featuring Only Him 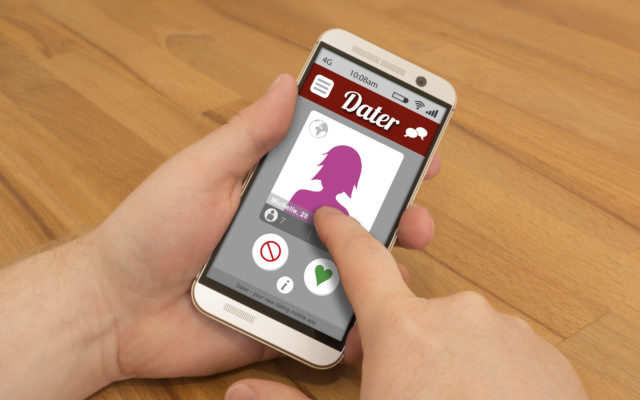 Holding a smartphone in one hand, swiping or using gesture control with the other hand. On the screen is a mock up of a dating app with a female profile.

What if you’ve tried all the dating sites – spent hours trying to make connections – and still find yourself with zero dates?  Well, you can always start your own dating website, featuring JUST YOU.

A 29-year-old guy in St. Louis named Colin O’Brien struck out on the major dating apps, and he was drained because it was exhausting trying to be funny and unique to stand out among all the other single guys.

So, he started his own website called DateColinOBrien.com, and 10 days ago he posted it in a Facebook group called “Date Ideas and Things to Do in St. Louis.”

The site is elaborate . . . he sells merch, and there’s a bio filled with honest information, like his height, weight, tax bracket, the COVID vaccination he got, his zodiac sign, his Harry Potter house, and his pros and cons.

The pros include his sense of humor, his love of tennis, and his “good regular hygiene.”  The cons include:  “Needs to be liked by everyone . . . bad at tennis . . . not particularly stylish . . . and a crippling fear of medical procedures.”

And it WORKED.  He’s already heard from nearly 200 eligible women and has 13 dates lined up.

(Fox2Now.com has an interview with him.  He isn’t the first guy to do this.  Two years ago, a guy in North Carolina created a dating app with only himself on it.  It’s unclear if he’s still single.)

A 29-year-old guy in St. Louis struck out on the usual dating apps, so he created his own dating site featuring just himself.  And it’s been a success.  He’s already heard from 200 women and has 13 dates lined up.