EAT SMARTER NOT HARDER: Five Foods You Should Never Reheat in the Microwave 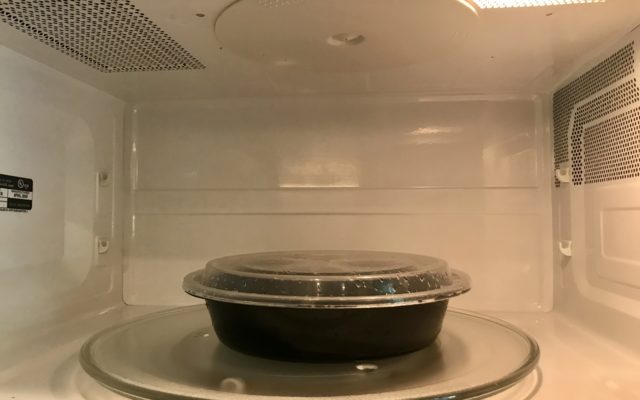 Food Network says there are five foods you should never reheat in the microwave:  Pizza, French fries, and steak are much better if you reheat them in a pan.  Spaghetti should be warmed up in a pot with a little extra water.  And fried chicken is best if you warm it up in the oven.

Some foods don’t do well in the microwave.  Here are the five things you should never put in there, along with the BEST way to reheat each one . . .

1.  Pizza.  If it’s one or two slices, reheat them in pan on the stove over medium heat.  It’s better than the microwave, because the crust gets crispy.  If it’s a lot of pizza, put it in the oven at 375 until the cheese looks nice and melted again.

2.  Fried chicken.  Instead of the microwave, use a baking sheet or a pan.  Cover it with foil, and cook it in the oven at 375 for about 10 minutes.  Then remove the foil and keep cooking it until the skin gets crispy again.

3.  French fries.  They’ll never taste as good as they were fresh.  But the best way to do it is in a pan with oil.  Once they’re hot, put them on a plate that’s lined with paper towels to soak up the oil.  And sprinkle some extra salt on if you want.

4.  Spaghetti.  Just toss it in a pot and cook it over medium heat.  If it’s too thick, add a little bit of water and some seasoning.

5.  Steak.  First, slice it up thin.  Then just add oil to a pan and cook it over medium until it’s hot enough.

Got a taste for a little more?  Try this:  (Food Network)