Dr. Fauci expresses concerns over how protests can spark a second wave of COVID-19 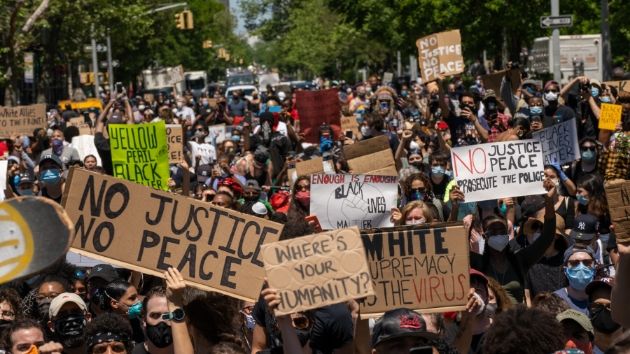 David ‘Dee’ Delgado/Getty Images(NEW YORK) — With thousands of protestors across America demanding justice for George Floyd, health officials have raised concerns over how the lack of social distancing seen in the crowds will affect future cases of COVID-19.

Speaking to Good Morning America on Wednesday, the nation’s leading expert on infectious diseases Doctor Anthony Fauci is worried of how the demonstrations will affect the progress made in flattening the curve.

“When you get congregations like we saw with the demonstrations,” he said, “that’s taking a risk.”  He added that while he is happy to see demonstrators wearing mask, it’s “masks plus physical separation” that helps prevent the virus from spreading.

While there may be a reduced risk of spreading the virus in an outdoor setting, Michael Osterholm, director of the Center for Infectious Disease Research and Policy at the University of Minnesota, says there’s room for concern regarding the protests.

Smoke from tear gas, pepper spray and fires from the riots all contribute to coughing — which aerosolizes the virus.

In addition, rates of COVID-19 cases have gone up in eight states.  With the coronavirus having an incubation up to 14 days, it’s believed that the bump in cases is due to the crowds seen during Memorial Day alongside states reopening their economies.  It isn’t believed the current numbers reflect the demonstrations — yet.

As of early Thursday, the U.S. surpassed two million confirmed cases and has a death toll of nearly 113,000, according to data from Johns Hopkins University.