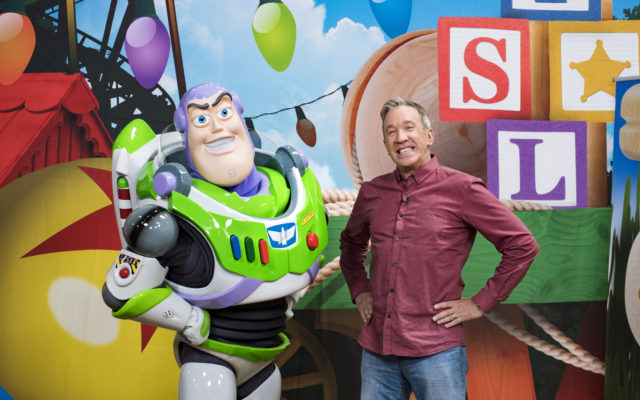 LAKE BUENA VISTA, FL - APRIL 26: In this handout photo provided by Disney Parks, Tim Allen strikes a pose with Buzz Lightyear after taping an interview for Toy Story Land-exclusive segments with "Good Morning America"? and "Nightline"? airing on ABC, Wednesday, May 2, 2018. Throughout the day, ABC shows, including "GMA,"? "Nightline,"? "The Viewâ" and "The Chew" will feature special segments about the new Toy Story Land opening June 30 at Disney's Hollywood Studios. In the new land, Walt Disney World Resort guests will "shrink"? to the size of a toy to explore Andy's backyard, ride the Slinky Dog Dash coaster, go for a spin on Alien Swirling Saucers and experience 4D carnival midway games on Toy Story Mania! (Photo by Chloe Rice/Disney Parks via Getty Images)

Buzz Lightyear is coming back to the big screen, in June 2022… this time:  in his own feature film.

Disney and Pixar announce that the beloved Toy Story character will get a “definitive” origin story.  According to Pixar Chief Creative Officer Pete Doctor, during the Disney Investor Day 2020 presentation, fans will learn “how this young test pilot became the Space Ranger we all know him to be, today.”

While Tim Allen has provided the voice of Buzz for the movies, Chris Evans will step into the new role, now.