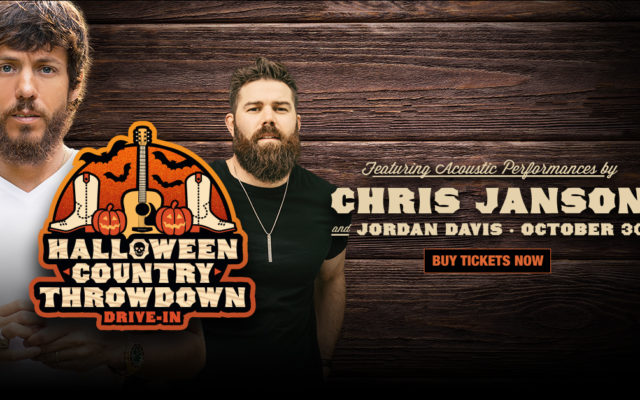 Live country music is making a return to the Chicagoland area with the Halloween Country Throwdown, featuring live acoustic performances by country music stars Chris Jason and Jordan Davis. Both artists will be live and in-person from the stage in the parking lot of the NOW Arena, on Friday, October 30, 2020 starting at 7:00 p.m. The parking lot will open at 5:30 p.m.

Vehicle Tickets will be sold with admission for up to 4 people for the price of $100* and $150* depending on proximity to and view of the stage, plus a limited number of VIP Vehicle Tickets with parking closest to the stage available for $300*. To attend the concert, a Vehicle Ticket must be purchased, however, consumers will have the ability to purchase an Additional Passenger ticket for $39.50 each. There will be a maximum of 6 people permitted per car so long as the vehicle legally seats that number of passengers.

Parking spaces will be socially distanced in accordance with the state’s safety recommendations and CDC guidelines. Besides inside of their vehicles, attendees will be allowed to sit atop their vehicle, in their trunk/truck bed or in a lawn chair on the driver’s side of their vehicle within the allotted space. Sound will be broadcast over a professional sound system and can be heard through car radios or portable FM stereos.

Tickets are on SALE NOW. Click HERE TO GET YOUR TICKETS

Who is Chris Janson? He is a “live legacy in the making” (Rolling Stone). Breakout country star Janson is a platinum-selling recording artist, high-octane entertainer, multi-instrumentalist, and award-winning singer/songwriter. In the five years since the release of his debut album, the three-time CMA nominee has collected prestigious accolades that place him amongst country music greats. He took home the trophy for ACM Video of the Year for his Gold-certified, inspiring hit song “Drunk Girl,” which also earned the Song of the Year title at the 2018 Music Row Awards and was named one of the “Ten Songs I Wish I’d Written” by NSAI. His chart-topping, double-Platinum smash “Buy Me A Boat” earned the same NSAI honor, making him one in a handful of the industry’s most elite artists to earn the title multiple times, as well as the iHeartRadio Music Awards Country Song of the Year. Now it’s onto new music for Janson: “Good Vibes,” the flagship single from his new album Real Friends recently became his third No. 1at country radio and his current single “Done” was most-added upon impact. In addition to his own successes, the talented songwriter has lent his pen to industry peers including im McGraw (“Truck Yeah,” “How I’ll Always Be”), LOCASH (“I Love This Life”) and the legendary Hank Williams Jr. (“God Fearin’ Man,” “Those Days Are Gone”)

MCA Nashville’s Jordan Davis has been named an Artist to Watch by Billboard, Rolling Stone, CMT, Pandora, Shazam, Amazon Music, Sounds Like Nashville, The Tennessean, SiriusXM, Whiskey Riffand more. A Native of Shreveport, Louisiana, Jordan graduated from LSU and briefly pursued the path of his degree working as an environmental consultant; however, his passion for music and songwriting eventually compelled him to move to Nashville in the summer of 2012. Jordan’s debut album Home State has accumulated1 billion streams worldwide and features his current Top 10 single “Slow Dance In A Parking Lot” as well as two recent back-to-back No.1 Platinum-Certified hits “Singles You Up” and “Take It From Me.” In 2019 Jordan won Best New Country Artist at the iHeart Radio Music Awards and was a nominee for ACM New Male Artist of the Year. He was also named Billboard’s Top New Country Artist of 2018 as well as Country Aircheck/Mediabase’s Most Heard New Artist of 2018.The hitmaker just released a new collaboration with GRAMMY-nominated artist Julia Michaels titled “Cool Anymore.” The track was written by Jordan and Julia along with Nicolle Galyon, Ross Copperman and Emily Weisband. The singer/songwriter has previously toured with the likes of Rascal Flatts, Jake Owen, Kip Moore, Brett Young and Old Dominion. On Jan. 10, 2020, Davis kicked off his headlining Trouble Town Tourin Milwaukee, Wisc. hitting over 20 cities including New York, Los Angeles, Atlanta and Denver with up-and-comers Kassi Ashton and Hailey Whitters on select dates. For additional information, visitwww.jordandavisofficial.com

About NOW Arena: NOW Arena (formerly Sears Centre Arena), owned by the Village of Hoffman Estates and managed by Spectra Venue Management, is an 11,000-seat multipurpose family entertainment, cultural, and sports arena located in Hoffman Estates, IL. NOW Arena, which opened in 2006, is designed to accommodate a variety of events including concerts, family shows, and sporting events. For more information regarding NOW Arena and upcoming events, please visit the arena’s website at NOWArena.com.

About NiteLite Promotions: Established in 1990, NiteLite Promotions is a reputable independent concert and event promoter that produces, markets and promotes individual concerts in facilities ranging from small intimate theatres to major venues seating tens of thousands of people as well as drive-in shows and private events. www.nitelite.com. 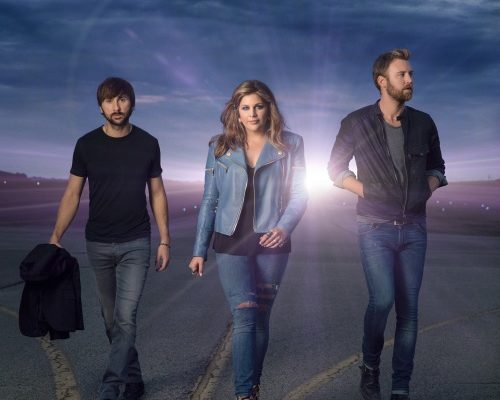