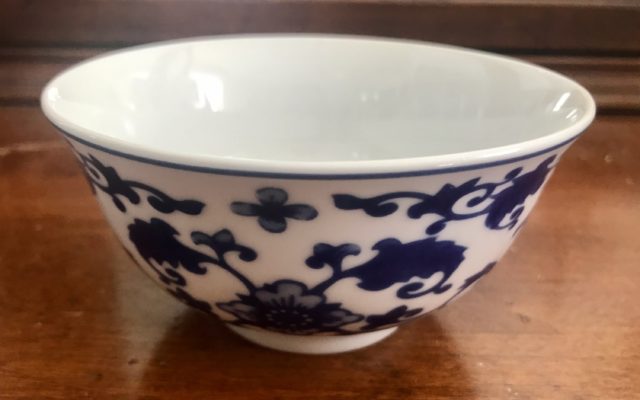 Feeling a budget pinch, this month?  You might want to double-check your closet or attic – do a little spring cleaning.

A small floral bowl, bought at a yard sale, near New Haven, Connecticut, for just $35, has been identified as a rare, 15th-century Chinese antique.  [It looks a bit like the one in this picture, from my house.  But the one, out east, is a lot prettier, and has a much more delicate floral design on the inside, as well…]

Experts say the “lotus bowl” originated from the court of the Yongle Emperor, who ruled from 1403 to 1424.

Only six other similar bowls are known to have survived; one is housed at the National Palace Museum in Taipei.

[Have you ever sold something at a yard sale or given something away that you later found out was worth big money?  For me, it would have to be the Wedgwood pitcher I bought for 50 cents at Goodwill, then saw online for 50 bucks – because it had a little chip on the top.  ~ Mo ]