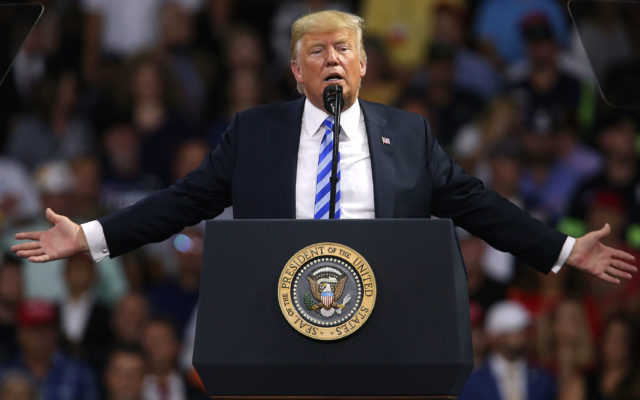 CHARLESTON, WV - AUGUST 21: President Donald Trump speaks at a rally on August 21, 2018 in Charleston, West Virginia. Paul Manafort, a former campaign manager for Trump and a longtime political operative, was found guilty in a Washington court today of not paying taxes on more than $16 million in income and lying to banks where he was seeking loans. (Photo by Spencer Platt/Getty Images)

Here’s a message from a movie star governor to a television star president.

After the incidents at the Capitol, Arnold Schwarzenegger had some stern words for President Trump.  Trump had been known, in his pre-presidential days, as the ornery host of “The Apprentice,” on TV.  His catch-phrase, from every episode was:  “You’re FIRED.”

In an interview, Arnold emphatically said, “You are terminated, Mr. President.”  He added, “That’s not our America.  That’s not my America.”

The former movie star and Governor of California also recently posted a speech about current events on Twitter.  He captioned it, “My message to my fellow Americans and friends around the world following this week’s attack on the Capitol.” During the video, he compares the storming of the American Capitol to the Nazi’s Kristallnacht.