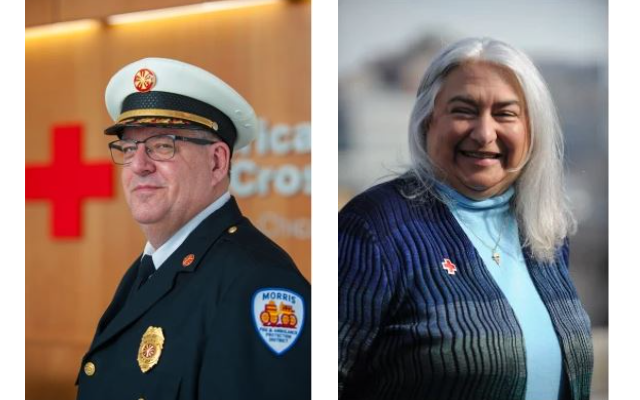 The American Red Cross of Greater Chicago announces the 2022 class of heroes – individuals who have gone above and beyond in their efforts to build and maintain better communities, and who have made a lasting impact on others in the process. Two of the thirteen heroes this year come from the Illinois River Valley.

Morris Fire Chief Tracey Steffes is our Firefighter Hero, recognizing him for his leadership after 200,000 lithium batteries exploded last year.

Red Cross Volunteer Ruthann Richardson is our Disaster Relief Hero. As a nurse and volunteer, she gave almost 2,000 hours of her time to help those in need.

Fire Chief Tracy Steffes of Morris, IL is the Firefighter Hero. In June 2021, Chief Steffes faced his biggest challenge as the leader of the Morris Fire Department, when nearly 200,000 lithium batteries exploded, and a massive fire with toxic fumes erupted, posing a serious threat to the health of his community. Chief Steffes led the effort to evacuate thousands of people from the area; nearly one-third of the city’s residents. Managing this large battery fire presented complexities as traditional fire extinguishment methods would exacerbate rather than extinguish the large, growing fire. Chief Steffes consulted with agencies around the world to coordinate the unique response to the fire and to continue operations in the days and weeks to come. At one point, more than 40 firefighting companies were on hand helping to battle the blaze. Chief Steffes now receives calls from other agencies when they face similar situations and provides insights to help protect their citizens. Chief Steffes is credited with staying calm during a situation that could have escalated further, without proper leadership and swift action.

Ruthann Richardson, RN of Tinley Park, IL is the Disaster Relief Hero. Ruth has a servant’s heart and has volunteered for us since 2017, after a 40-year career as a nurse. Last year, as a nurse volunteer, she worked day and night and gave almost 2,000 hours of her time to the Red Cross. She has responded to numerous disasters, both here in Illinois and elsewhere in the U.S. Hurricane Florence in North Carolina was her first major deployment; more recently, she deployed to Louisiana after Hurricane Ida. When you speak with Ruth, you can tell she truly cares about others, and it shows in her volunteer efforts. “My life is a gift and what I bring to others can be a gift, too. If I can provide a positive experience to someone’s life, particularly if they’ve been through one of the worst experiences, then I have done something right,” she said.

This is the 20th year the Red Cross has honored a class of heroes at our Heroes Breakfast, typically attended by nearly 1,000 individuals. This year’s event is scheduled for Wednesday, May 11 from 7:30 to 9:30 a.m. at the Hilton Chicago.

“For twenty years, the Red Cross has honored the heroes among us. In 2022, it is a great privilege to celebrate these outstanding individuals who selflessly give of themselves with no expectation of gain, yet who have made a tremendous impact in their communities and beyond,” said Celena Roldán, chief executive officer of the American Red Cross of Illinois. “It is inspiring, seeing the good they have done and continue to do. We look forward to honoring them in person at this year’s Heroes Breakfast.”