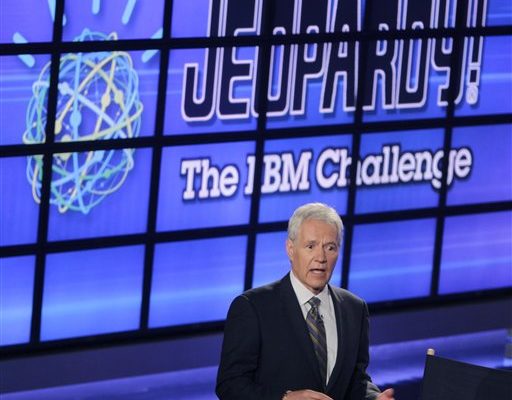 Alex Trebek, host of the "Jeopardy!" quiz show, speaks to an audience of primarily media about an upcoming "Jeopardy!" show featuring an IBM computer called "Watson" in Yorktown Heights, N.Y., Thursday, Jan. 13, 2011. It's the size of 10 refrigerators, and it swallows encyclopedias whole, but an IBM computer was lacking one thing it needed to battle the greatest champions from the "Jeopardy!" quiz TV show - it couldn't hit a buzzer. But that's been fixed, and on Thursday the hardware and software system named Watson played a competitive practice round against two champions. A "Jeopardy!" show featuring the computer will air in mid-February, 2011. (AP Photo/Seth Wenig)

On Tuesday, it was the Ottawa Senators turn to announce their pick at the NHL Draft. The “Jeopardy!” background music started playing, they cut to Alex Trebek on the Jeopardy stage. He says, “With the 3rd pick in the 2020 NHL Draft the Ottawa Senators choose the this player.” Then he answers: “The correct response? Who is Tim Stützle.”

The Blackhawks drafted Lukas Reichel with the 17th overall pick in the 2020 NHL Draft last night.  The 18-year-old German left winger skated in 42 games for Eisbaren Berlin [[ iss-barron ]] in Germany’s top league this past season, scoring 12 goals and 12 assists.  Reichel also skated in Berlin’s exhibition game against the Blackhawks in Germany last September as part of the 2019 NHL Global Series.  He represented Team Germany at the 2020 World Junior Championship where he notched five points in seven games.

ESPN’s  Chris Peters and Emily Kaplan provided a detailed breakdowns of the Blackhawks first round pick:

Scouting report: Reichel has great hands and creativity. He creates space and can extend plays. He also makes really smart reads with the puck on his stick and processes the game quickly. — Peters

Team fit: The Blackhawks would have been in on Yaroslav Askarov had the goalie been available here; Chicago needs to restock its goalie pipeline. Instead, the Blackhawks got a skilled, high-upside forward (Chicago had selected a defenseman with two of its past three first-round picks). Reichel is the second German to be drafted this year. GM Stan Bowman got a first-hand look at scouting the winger when Reichel’s team played against the Blackhawks last fall during the NHL’s Global Series. — Kaplan