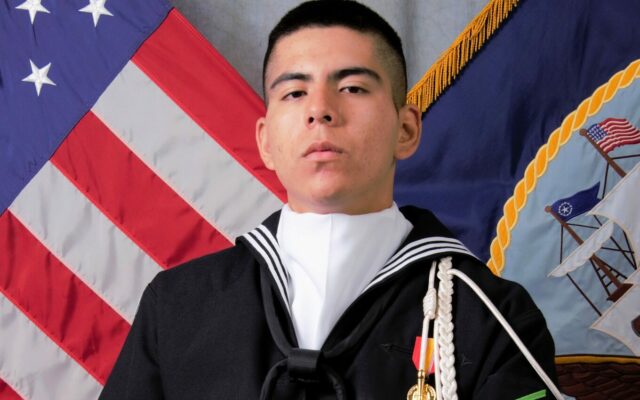 “I joined the Navy because I wanted to be the first in my family to join the military and I wanted to see the world,” said Godinez.

Established in 1931, the U.S. Navy Ceremonial Guard is the official honor guard of the U.S. Navy and is based at Naval District Washington Anacostia Annex in Washington, D.C.

According to Navy officials, the U.S. Navy Ceremonial Guard’s primary mission is to represent the service in Presidential, Joint Armed Forces, Navy, and public ceremonies in and around the nation’s capital. Members of the Navy Ceremonial Guard participate in some of our nation’s most prestigious ceremonies, including Presidential inaugurations and arrival ceremonies for foreign officials.

Sailors of the Ceremonial Guard are hand selected while they are attending boot camp at Recruit Training Command in Great Lakes, Illinois. Strict military order and discipline, combined with teamwork, allow the Ceremonial Guard to fulfill their responsibilities with pride and determination. They are experts in the art of close order drill, coordination and timing.

The Ceremonial Guard is comprised of the drill team, color guard, casket bearers and firing party.

“I enjoy the fact that we represent the Navy on such a large scale,” said Godinez. “At the Guard, we get to be the face of the Navy. It’s such an honor.”
There are many opportunities for sailors to earn recognition in their command, community and careers.

“I am proud to have made it through bootcamp and Alpha Company training and to have the opportunity and honor of joining the elite ranks of the Ceremonial Guard,” said Godinez.

As a member of the U.S. Navy, Godinez, as well as other sailors, know they are a part of a service tradition providing unforgettable experiences through leadership development, world affairs and humanitarian assistance. Their efforts will have a lasting effect around the globe and for generations of sailors who will follow.

“To me serving in the Navy means protecting my family, the people I love, and this country as a whole,” added Godinez.